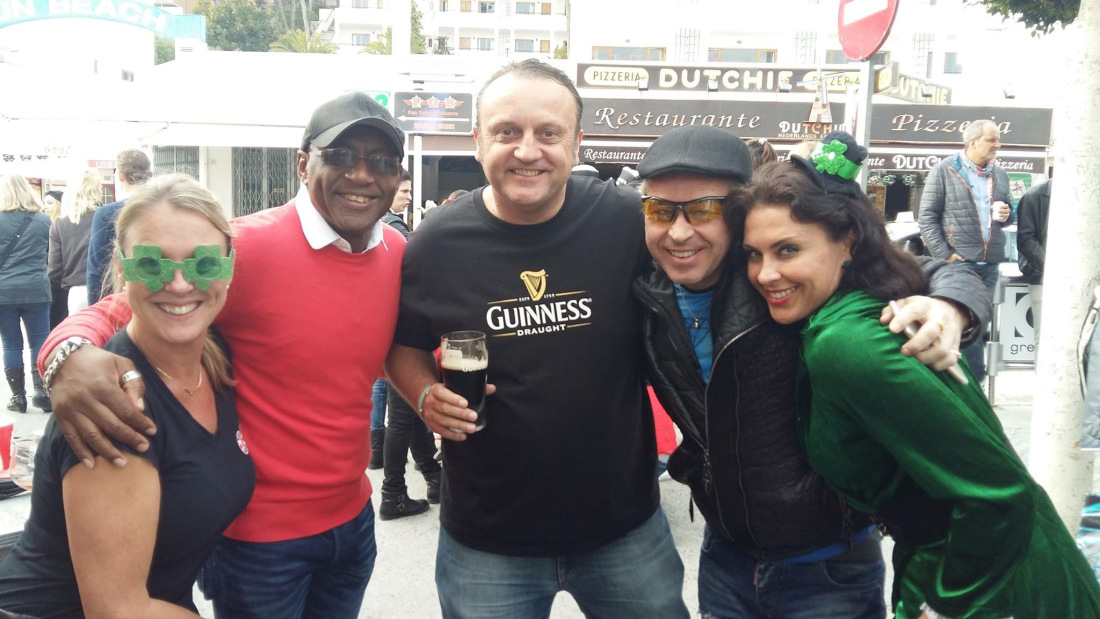 Something for your Mallorca Weekend

Happy St Patrick’s Day! A busy weekend planned with today England v Ireland in the rugby which fittingly if Ireland win they’ll win the Grand Slam. Sunday morning at 11.00 is the beach clean with Ondine over in Santa Ponsa. I’ve said before these guys do a great job cleaning our beaches which they wouldn’t have to do if we were all a little more vigilant with our rubbish. Make sure you take reusable gloves and bags. Don’t forget from 11.00am on Sunday to 7pm the St Patrick’s Festival in Santa Ponsa offering free attractions for the kids, a craft market, food and drink and the bars selling copious amounts of Guinness. The stage line-up organised by Radio One Mallorca is as follows(note times could vary);

Hosts: Richie Prior and Liam Hadley

Let’s hope the weather holds up and if you’re coming make sure you come and say hi as it’s always good to put a face to a name, oh and mine is a Guinness! After a few pints of Guinness most people enjoy a kebab and last Tuesday was the National Kebab Awards in the U.K. Hosted by one of my radio friends Lucy Horobin. The annual event is the only one to recognise the contribution made by the kebab industry to the British economy, worth more than £2.8billion a year, supporting around 200,000 jobs across restaurants, suppliers and the food industry.  This year’s awards raised money for the bone and soft tissue cancer charity Sarcoma UK. Every day, more than 1.3m kebabs are sold across Britain. The UK’s first kebab shop, Istanbul Restaurant in Soho, opened during the Second World War and pictures of it feature in the Imperial War Museum. However it was not until 1966 that the famous doner kebab, cooked on a vertical spit first appeared with the opening of the Hodja Nasreddin Kebab House by Çetin Bukey and Kojay Hüseyin in in North London’s Newington Green. There are now over 20,000 kebab outlets in the UK selling around 2,500 tonnes of lamb and chicken doner a week. There are also around 200 doner kebab manufacturers in the UK, with a turnover in excess of £750m.

Continuing the fast food theme did you see the story that this week Greggs the bakers have started to employ doormen particularly in their city center shops. Apparently things get a bit rowdy especially if they’re open in the evenings and also people are trying to steal the famous sausage rolls. We asked our listeners to come up with some headlines for this and as usual they didn’t disappoint.

“Greggs in move to keep doughnuts outside rather than inside.”

“More beef on the doors than found in a steak bake!”

Sad news this past week of the death of Harry Goodman, one of the most influential figures in the UK travel industry over the past 50 years. The founder of International Leisure Group, which featured well known travel brands such as Intasun, Lancaster and Global, Club 18-30 and the airline Air Europe. I arrived in Mallorca on an Air Europe flight in 1990 as a new Intasun Rep. my family thought I’d last a week and 27 years later I’m still here! I spoke to his Daughter Naomi as Jacques from Pirates and Harry were good mates. We agreed they’d probably be having another great party together.

Real Mallorca got a creditable draw despite being outplayed by second placed Villarreal B. They are now 8 points clear at the top with 9 games to go. Please checkout our Radio One Mallorca Facebook page for a link to a short film called Derby Days: Mallorca – The Once in a Lifetime Derby. It’s a look back at the derby match between Real Mallorca and Atlético Baleares which Mallorca won 3-2.

My eldest Son Jacob will be going to a football tournament in Menorca this Easter called the MeCup. There’s over 3,500 people descending on the island but they have a problem as not enough hotels are open. With Easter falling earlier this year a lot of the hotels don’t want to open for a week and then have people on contract for the whole of April with hardly any people arriving on holiday. We’ve only just been given our accommodation in a hotel which will open but we will have to walk to the hotel next door for breakfast and evening meal as they don’t want to staff the kitchen and dining room. You couldn’t make it up, it’s worth over 2 million euros to the island and they’re struggling to find both accommodation and staff. This outdated system of PARO(unemployment benefit)has to change and everyone in my opinion should be encouraged to work for 12 months, which happens in most other countries in the World.  We found out that his team San Francisco will play Español from the mainland, Atlético Villacarlos and CEE Sant Luis from Menorca, CD Cide from Mallorca and a select team from England called South West Select. I can’t tell you how excited I am that was until I found out that the first game was on Wednesday evening and we don’t arrive until Thursday morning. The team go Wednesday afternoon and I’ve tried to change our flights but to no avail. They play their next game at 09.30 on Thursday morning, our flight gets in at 08.55, so we’ll have to be pretty quick getting out of the airport. I checked with Iberia to see if there was an earlier flight either Wednesday afternoon or earlier Thursday morning. They offered me the 07.15 on Thursday which is an hour early, which sounded ok until they said we’d have to pay 212€ for the privilege! I politely told the guy to stick it in my bestest Spanish and said I’ll take my chances on the later one!

Here’s a headline you maybe never thought you’d see, “Spain one win away from rugby World Cup!” They head into the final round of the Rugby Europe Championship knowing victory over Belgium in Brussels this weekend, will secure automatic qualification in the Europe 1 slot in Pool A in 2019.

Richie presents the Radio One Mallorca Breakfast show Monday to Friday 07.30-11.00am on 93.8fm in Mallorca, online at www.radioonemallorca.com on mobile through their free App for IPhone, Android, The Tunein Radio App and on the Spanish TDT TV service. If you can’t hear me on the radio then you’ll find me working at Pirates Adventure the islands number one night out and every now and again i may make an understudy appearance!

Feel free to email me at rprior@globobalear.com