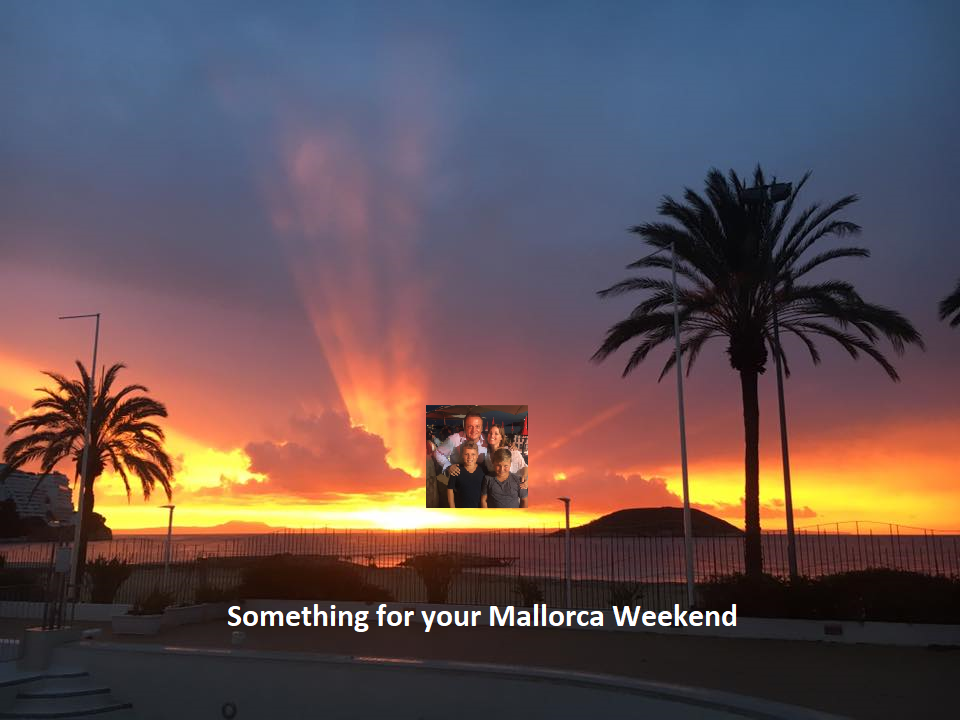 Something for your Mallorca Weekend

The tourist resorts that have been sleeping in the winter are showing signs of life. I can see it as I visit many parts of the island. It’s 16 days to go until Summer time should officially start when the clocks go forward and 21 days until Easter. Where I work at Pirates which opens on Friday March 30th all the artists are back and are in the thick of rehearsals. Great to see some old faces but also plenty of new ones who will be bringing some exciting new elements to this years show. I will update you more the closer we get but notes for your diaries, Friday March 30th Adventure opens, Friday April 27th Reloaded opens and Saturday May 5th Gringos opens. All of which will be offering great entertainment throughout the Summer.

Another date for your diary is Sunday March 18th for two reasons. Firstly our friends at Ondine are organising another one of their beach cleans in Santa Ponsa. These guys do an amazing job around our islands. Their team of experienced marine scientists and divers work closely with local authorities and stakeholders to create an effectively managed network of Marine Protected Areas around the Balearic Islands, allowing marine ecosystems to recover and thrive together with prospering local communities and industries. Their Dos Manos initiatives have been developed to tackle one of the biggest threats to our oceans and to ourselves: plastic pollution. Through their Dos Manos Beach Cleans, Schools Programme and Partners Programme they inspire and help local communities and companies to take action while raising awareness, sharing knowledge, and encouraging innovative solutions. Once you’ve helped clean the beach you can come and join the Radio One Mallorca crew and Calviá Town Hall on the roundabout by Ramon Moncada for a cracking day filled with music, market stalls, free kids attractions and street animation. On the main stage will be the BIC Choir, Marianne Armstrong, Talahm, Liam Live, Glenn King, Angel Flukes and the Raggles. We’re there from 11am to 7pm so come and join us for the Craic!

I mentioned above it’s three weeks until Easter and apparently there could be a shortage of hot cross buns this year. US raisin prices have increased by 50% since September due to crop shortages in California. The US shortages have sparked a price rise in sultanas from Turkey, a key supplier to the UK. Prices of Turkish sultanas have risen by 30%  since September. At the same time, currant prices are soaring in Greece. Production there is about a third down, and prices on the UK market are up 40% since September. So you can see there is a problem. However Lidl has just launched a new Hot Cross Bun Ice Cream that is infused with the flavour of the iconic seasonal favourite. The £1.99 480ml tubs are driving shoppers with a sweet tooth wild on social media, with one branding the ice cream a ‘game changer’. It’s made with British double cream and whole milk, so it’s not for those who are counting calories as a 100ml serving contains 129 kcal.

I must give a big shoutout to my Nephew Will who is currently at the Royal Academy of Music. He like his Dad Don plays bass guitar and double bass. This week he was invited into the Radio 1 live lounge studios to play for Mabel. Mabel McVey (born February 19, 1996), mononymouslyknown by her stage name Mabel, is a Spanish-born Swedish-British singer and songwriter based in London. Born in Málaga, Spain and raised in Stockholm, Sweden, she is the daughter of singer and songwriter Neneh Cherry and Massive Attack record producer Cameron McVey. Best known for her 2017 hit Finders Keepers which reached number 8 in the U.K. Charts she sang her new song Fine Line and a cover of Coldplays Fix You with my Nephew playing double bass. An amazing experience that he absolutely loved and I’ve no doubt he’ll get more in the future.

Real Mallorca lost their second consecutive game with a 0-1 home defeat by CD Ebro.  It was a really disappointing game with most of the team under performing and they’ll need to get back to winning ways on Sunday when they face Villarreal B the team in second place. They are the team who in my opinion are the best Mallorca have faced all season. They are separated currently by 8 points so a win would see them go 11 points clear at the top with 9 games to go. A loss however and it could be squeaky bum time.

A story that brought a smile to my face this week, former Arsenal forward Sanchez Watt received the most bizarre red card of the season after a referee mistook the player saying his own name for dissent. Watt, playing for Hemel Hempstead in their National League South clash with East Thurrock on Tuesday night, was asked his name by ref Dean Hulme so that he could book him for kicking the ball away. But the official grew frustrated when the answer given was ‘Watt’, mistaking the reply as the player saying ‘What?’ and arguing against his decision. Hulme asked Watt three times for his name, receiving ‘Watt’ as the reply each time, before seeing red and giving Watt his marching orders. Hemel Hempstead captain Jordan Parkes rushed over to explain to the referee that the player’s name was actually Watt, and he had been clearly telling him so all along. A presumably embarrassed Hulme then reversed his decision to punish Watt with a second yellow card for dissent, and he stayed on the pitch. The Ref was probably worried about navigating the famous Hemel Hempstead roundabout system. For those that don’t know, it’s six small roundabouts surrounding one large one and it’s a nightmare to drive around.

I found this list of the top 30 little victories that we celebrate regardless of its worth and I’m sure you’ll find some of your own in there.

1. Finding money in a coat pocket
2. Something you were planning on buying anyway being reduced in price
3. Getting an unexpected discount on an item when you reach the checkout
4. Finding money on the floor
5. Getting good weather for a special event
6. A delivery expected between 8-5pm comes at 8:01
7. Not needing any work done at the dentist
8. When you get an unexpected tax rebate
9. Turning up at a full car park for someone to leave so you get a space
10. Car passing MOT first time
11. Being upgraded to first class
12. Getting in a queue at the front just before loads of other people join the queue

13. Someone leaving a table in a busy pub just as you arrive
14. Getting home just as the postman was about to leave a ‘Sorry we missed you’ card
15. Finding a parking space right outside the shop you want go in
16. It starting to rain just as you walk in the door / bring the washing in
17. Getting to the bus stop just as it arrives
18. A social event you really can’t be bothered with getting cancelled
19. When the vending machine gives you two chocolate bars instead of one
20. Hitting all the green lights on the way into work
21. Getting the last of something on offer in a supermarket
22. Waking up in the night and realising you still have hours left in bed before you have to get up
23. Parking perfectly first time
24. Getting a compliment from a stranger
25. Getting a whole aisle on a plane to yourself
26. Getting to the station just as the train pulls up
27. Finding the last dress or piece of clothing in your size on the rack
28. Waking up and realising it’s a Saturday and you don’t have to go to work
29. When a bet comes in
30. Having the exact change you need to pay for something

And finally, Sunday is of course Mothers Day. Wishing all you beautiful Mums out there a fun filled Sunday with your loved ones.

Richie presents the Radio One Mallorca Breakfast show Monday to Friday07.30-11.00am on 93.8fm in Mallorca, online atwww.radioonemallorca.com on mobile through their free App for IPhone, Android, The Tunein Radio App and on the Spanish TDT TV service. If you can’t hear me on the radio then you’ll find me working at Pirates Adventure the islands number one night out and every now and again i may make an understudy appearance!

Feel free to email me at rprior@globobalear.com